Arrested For Shoplifting In Sonoma County? What Are The Next Steps?

Shoplifting is one of the most commonly charged offenses in California, with a huge range of possible penalties.
The simple act of walking into a store and taking some goods without paying can be classified as an infraction, a misdemeanor or a felony, depending on a lot of circumstances. 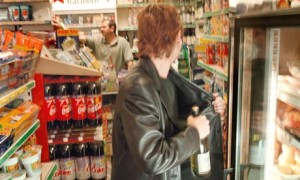 Before the prosecutor will decide what charges, if any, to file against a suspect, attorneys from the District Attorney’s Office will take a number of facts into consideration –
-What was the value of the item(s) taken?
-Was the property damaged in any way?
-Did the suspect use any force or the threat of force to take the property?
-What kind of criminal history does the suspect have?
-Did the suspect enter the store with the intent to commit theft or did the suspect decide to commit theft once he or she was already inside the premises?
-Can it be proven that the theft was actually intentional or is there a chance that an innocent shopper simply forgot to pay for something?
The answers to these questions will guide the prosecutors in deciding what types of criminal charges to file against a person suspected of shoplifting and whether to allow a diversion or dismissal later.
The Value of the Item Taken
Typically, if the value of the property taken is low, nothing is damaged, the store receives the property back, and the suspect has no significant criminal history, the District Attorney or Prosecutor might be inclined to reduce the charge to a simple infraction, similar to a speeding ticket.  Depending on the county, the defendant might be required to take some classes, provide a DNA sample or make a financial contribution to a program that benefits victims of crimes before the case will be reduced from a misdemeanor to an infraction.  An infraction will include some fines, but no probation and no jail time.
If the value of the item taken is significant but less than $950, the suspect will probably be charged with misdemeanor petty theft.  If, however, the suspect has some history of theft, if force was involved in the crime, or if it appears that the suspect entered the store with the plan to commit a theft, he or she could be looking at more serious charges, even a felony or two.
Any theft of goods valued at more than $950 will probably be charged as felony grand theft.  Also, some theft of various agricultural products valued at more than $250 can also be charged as felony grand theft.

Defendant’s Criminal History
Usually, if someone has had a shoplifting conviction reduced to an infraction in the past, the Prosecutor will not offer such a favorable plea or deal again.  The suspect will probably be charged with either a misdemeanor or a felony this time.
A suspect with a prior conviction for petty theft can also be charged with a felony if he or she is convicted of petty theft a second time (petty theft with a prior).  Suspects don’t always realize that stealing a candy bar can send them to state prison if they’ve been convicted of stealing candy bars in the past. However, this scenario is changing because of several recent changes in the law due to passage of realignment and several recent ballot propositions.  The only way a current theft of valuables exceeding $950 becomes a felony is if defendant has been convicted of an offense enumerated in Penal Code section 667(e)(2)(C)(iv) or for an offense registerable per Penal Code 290(c).  (See Penal Code 490.2.)] It is  Not Always Apparent that the Suspect Entered the Store with the Intent to Commit Theft
In California, commercial burglary is defined as entering a building (other than a home) with the intent to commit theft.  This means that you are guilty of burglary the minute you step into the store if it can be proven that you were even thinking of stealing something.  It is obviously difficult to prove a defendant’s mental state, but the prosecutor will attempt to do so with circumstantial evidence (Did the suspect bring any money with her?  Did she go straight for the thing she stole, then head straight for the door?  Was the suspect using a stolen credit card?  Did the suspect bring an empty shopping bag into the store no longer carries the weight it once did since most people now bring shopping bags into stores to avoid paying for bags!
Prosecutors will review the store’s video surveillance tapes to determine if the suspect looked around suspiciously as soon as they entered the store to try to determine an early intent to steal right from the onset. Defense Counsel will need to put this interpretation into the right context.
If it looks like the suspect came onto the premises or the store with the plan to steal, you can be charged with felony commercial burglary.
Did the Suspect Use Force or the Threat of Force?
In California, robbery is defined as theft + force (or the threat of force).  If a Loss Prevention Officer (commonly called an “LP”) blocks your escape path and you push or shove him or her  hat can transform a simple infraction into a serious felony. 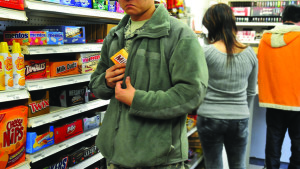 The Civil Demand Letter
If you have recently been arrested for shoplifting, you will probably receive a letter in the mail from the store where you were cited or arrested for stealing from the store’s attorney.  The letter will inform you that you owe the store a sum of money, usually several hundred dollars or more!   The letter may contain other threatening language and will appear very intimidating.   The store is given a statutory right of civil remedy pursuant to Penal Code section 490.5. What we can do is ensure the amount they seek in compensation, usually for the time to investigate and capture the suspect, is accurate and fair.  Our Law Firm has repeatedly and successfully reduced these extortionary amounts to a fraction of what the store or business originally demanded.
A civil demand letter is basically a threat to sue.  The store is claiming that they suffered some loss and that you were responsible for whatever loss they are claiming.  If you refuse to pay and deny that you caused the store any loss, the store will have to decide whether or not it intends to sue you.  Again, in order for the store to prevail in any civil suit, they will have to prove to the court that you caused them to suffer some actual, financial loss.  The store will not waste value time and money to pursue a theft suspect if the amount is small. The companies that handle these types of cases handle hundreds if not thousands to make them economical.  WE can discuss this with you since each case is different.
The civil demand has no effect on the CRIMINAL case against you.  The District Attorney will pursue the criminal theft charges regardless of whether or not you pay the store’s civil demand.  Paying money to the store will not help your criminal case, and refusing to pay the civil demand will not hurt your criminal case — they are completely independent of each other.
Since shoplifting can carry such a huge range of possible penalties, you should immediately talk to a local attorney if you are arrested.  Because shoplifting charges can damage your integrity and diminish your job prospects you should consult with an experienced attorney who has been practicing in this area for 25 years.  Our firm has recently had a lot of success defending against shoplifting charges.  Call for a free consultation at 707-571-8600 OR 415-492-4507 to see what we can do for you. 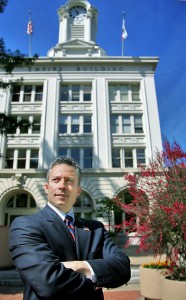 At Fiumara & Milligan Law, PC we have defeated numerous shoplifting charges in the past and have gotten great results for our clients over the years.  We will do our best to add your case to that growing list as well.