Santa Rosa Residential Burglary Alert And What We Can Do

On Thursday, November 19, 2015 at about 7:20 a.m. the Santa Rosa Police Department received a report of an attempted armed robbery on Rhianna St. in Santa Rosa. Officers learned that three men approached the house. At least two were armed with handguns, confronted the 26-year-old male resident in the front yard and demanded to enter the house. The resident fought the suspects off and tried to retreat into his garage. He struggled to close the garage door while the men attempted to pull it open. Eventually the would-be robbers gave up and fled in a vehicle.
The victim was uninjured. The exact motive for the attempted robbery is not known but police believe that the home was possibly targeted because the suspects thought there was a medicinal marijuana grow at the residence despite the fact no such grow currently exists. 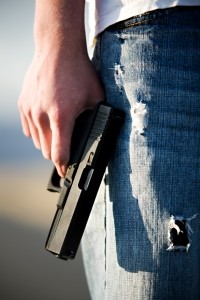 Armed Robbery Charges in California
When a robbery is committed using a weapon or simply with the pretense of a weapon, it will often be charged as an armed robbery. Although guns come to mind first, a weapon can be almost anything that might cause bodily harm to another. Knives, baseball bats and other similar items are often used in armed robberies.
All California courts treat armed robbery as a very serious crime. Hence, there are very serious consequences for those convicted of this offense. An armed robbery conviction will put a felony offense on your record, damage your reputation, and you will end up with a felony state prison sentence. 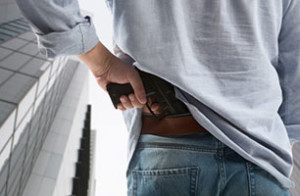 How Does California Law Define Robbery?
According to California Law, Robbery occurs anytime someone uses force or instills fear during the process of taking property from another. While similar to larceny, robbery requires that the incident happen while in the direct presence of the victim. This is considered a very serious, violent crime resulting in enhanced sentences or long prison terms.
Robbery without the use of a weapon can be tried either as a first-degree or a second-degree offense. A first-degree robbery conviction may lead to spending up to nine years in state prison. A second-degree robbery conviction may lead to a five-year sentence. These rules are not hard and fast because of recent changes in the law so consult an attorney of your choice for the circumstances and facts that apply to your case.
Since robbery requires some use of force or intimidation, the use of a weapon is one of the most obvious ways this occurs. When this happens, the offense is termed armed robbery. The penalties for armed robbery are more serious than those of a simple robbery that is committed without using a weapon. 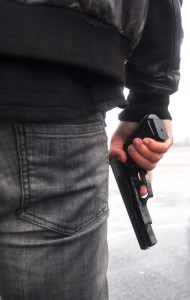 What are the Penalties for Armed Robbery?
California has a law known as “10-20-Life” that applies to convictions when a gun is used during the commission of a violent crime. “Use a Gun and You’re Done” law, adds extra prison time to the sentence of anyone who is convicted of using a gun while committing a robbery.
Under this statute convicted felons who used a firearm or other weapon to cause intimidation and instill fear during a crime may face up to ten years in a California state prison in addition to the sentence for their crime. For example, someone who commits first-degree robbery may face 19 years in state prison without even firing the gun. If the gun is fired, the enhanced penalties are increased to 20 years in prison. When someone is seriously injured or killed during the commission of a crime, the enhanced sentence can stretch from 25 years to life in prison. 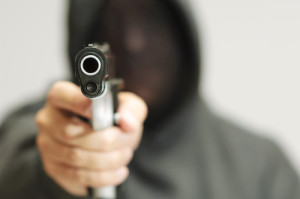 Fiumara & Milligan Law, PC can Help!
If you have been charged with armed robbery, it is vitally important that you contact an experienced criminal defense attorney as soon as possible. Prosecutors are known to ask the Court for more serious charges if any type of force is used during a robbery, theft or while shoplifting. Normally these types of charges would be labeled as misdemeanors, but can be elevated to felonies if they are labeled as armed robbery.
At Fiumara & Milligan Law, PC we are familiar with a wide variety of legal defenses in this type of case and can often help clients get the charges against them reduced. In other cases, the charges may be dismissed entirely. 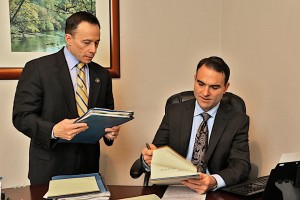 Call (707) 571-8600 in Santa Rosa and (415) 492-4507 to schedule a consultation or go online to complete the consultation form to speak with attorneys Justin Milligan or Michael A. Fiumara, armed robbery attorney experts, and discuss the details of your case today.