The number of pedestrian accident injuries and fatalities have sharply risen both in California and across the U.S. for many reasons.

People can be seriously injured or killed when they are struck by motor vehicles while they are walking, jogging or riding a scooter or bicycle.

There are several factors that have contributed to the increase in pedestrian injury related deaths. Both pedestrians and motorists should take steps to minimize the risk of being involved in accidents.

The Governors Highway Safety Association recently released a report that showed that pedestrian fatalities in 2018 were at a 28-year high.

During 2018, 6,227 people were killed in pedestrian accidents nationwide. This was a 4 percent year-over-year increase from 2017 and was the highest number of pedestrian deaths since 1990.

Since 2008, the executive director of the GHSA reports that pedestrian fatalities have increased by 35 percent. Arizona, Texas, Georgia, Florida, and California combined to account for 46 percent of the total number of pedestrian deaths in the nation. California had the highest number of deaths in 2018 with 432 fatalities.

SUVs were much likelier to be involved in fatal pedestrian accidents because of their larger sizes and heavier weights. The number of SUV-involved pedestrian fatalities increased by 50 percent from 2013 to 2018.

By comparison, the number of pedestrian fatalities in which passenger cars were involved increased by 30 percent during the same time period.

Factors leading to the increase in pedestrian accidents

Multiple factors are believed to contribute to the increase in pedestrian accidents. One factor is that SUVs are likelier to cause serious injuries and fatalities when they are involved in accidents with pedestrians. Since 2013, the proportion of SUVs that are registered has increased.

Behavioral factors also have contributed to the increase in pedestrian accidents and fatalities. Drivers are much more likely to be distracted by smartphones and other electronic devices now than they were in 2007 because of the widespread use of cell phones, GPS and constant texting.  Pedestrians may also fail to check before crossing the street when they are using their own cell phone or our distracted by wearing buds in both ears and listening to other audio devices. Other driver-related factors that have contributed to the increase of pedestrian accidents and fatalities are speeding and drowsy driving. 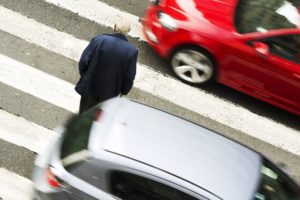 Pedestrian rights when you are injured in an accident

If you were struck by a vehicle while you were crossing the street in a marked crosswalk or even through an unmarked intersection, you may have legal rights to recover compensation for your losses. Each case is different and based on the particular circumstances surrounding all the factors including weather, roadway conditions, etc.

As we have previously explained, pedestrians who are struck while crossing the street at marked or unmarked intersections generally have the right of way under California law. According to Cal. Vehicle Code § 21950(a), motorists must yield to pedestrians who are crossing the street within crosswalks or at unmarked intersections.

By contrast, if you crossed in the middle of the street instead of at an intersection and stepped into traffic without the driver having enough time to avoid hitting you, you may be unlikely to recover unless of course the person who struck you was impaired, or the roadway was defective in some way. It pays to consult an experienced and skilled attorney.

If your loved one or a family member has been killed by a negligent driver in a pedestrian accident, you may have the right to recover compensation. In order to file a wrongful death claim, however, you must have a specific relationship to the deceased person and you must also satisfy other conditions. 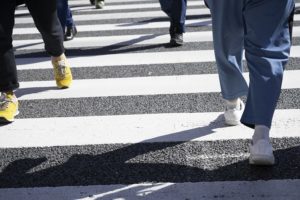 California limits the right to file a wrongful death lawsuit to people who have the following types of relationships:

-Spouse, domestic partner, children, or grandchildren if the children are deceased

-People who were dependents of the deceased person

There are steps that both pedestrians and motorists can take to avoid pedestrian accidents. Pedestrians should never try to cross the road at a mid-block area but should instead only cross at an intersection.

It is wise for pedestrians to avoid using their smartphones and other distracting devices including headphones while they are walking.  Pedestrians should also avoid drinking alcohol before they go for a stroll down memory lane. If they will be walking at night, they should wear bright, reflective clothing so that they are easier to see. Also walk on lighted path and or protective sidewalk verses an unlit road.

Motorists should stay alert while they drive and watch for pedestrians along the sidewalks who appear as if they might try to cross the road. They should adhere to the posted speed limits and should avoid using their smartphones and other electronic devices when they drive. Motorists should also avoid driving when they are drowsy and should never get behind the wheel when they are under the influence of alcohol, drugs, new prescription drugs or all three.

If you have suffered a serious injury in a pedestrian accident or have lost your loved one, it is important for you to immediately talk with an experienced pedestrian accident lawyer at Fiumara & Milligan Law today. You have a short 6-month statute of limitations if your claim is against a public entity and only 2 years against anyone else including all private parties.

Our Team of experienced and highly skilled attorneys, staff and personnel will happily assist you and answer all your questions.  We also offer you an honest assessment of whether you have valid grounds to file a lawsuit. If we agree to take your case, we will FIGHT to recover the maximum amount of compensation to which you should be entitled. YOU WILL NOT PAY Anything UNTIL we WIN FOR YOU! 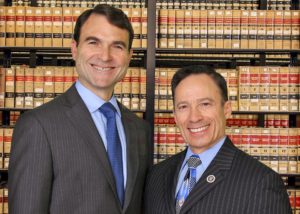 Call the Fiumara & Milligan Law today to schedule a consultation at 707-571-8600 or at our other North Bay conveniently located address at 415-492-4507 to learn more about your potential claim and how we may maximize your compensation.

We stand by our motto:

“The Right Attorney makes all the Difference.”