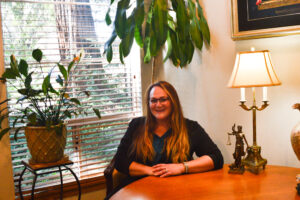 Jessyca Hoagland was born and raised in West Sonoma County, California. Upon graduating from Analy High School, she was recognized with the Army Reserve Scholar Athlete Award for academic and athletic excellence.  She continued her athletic career and played softball for the Santa Rosa Junior College, where she earned both her Associate of Science and Associate of Arts Degrees, majoring in Administration of Justice.

During college she was employed as a paralegal for a local Civil Litigation firm who specialized in family law and personal injury cases, and was selected for an internship at the Santa Rosa Police Department Bomb Squad and Environmental Crimes Units which allowed her to gain important knowledge about law enforcement agencies and their functions within the scope of the law.

After graduation from the SRJC, she moved to Nevada where she began working as a paralegal for the Storey County District Attorney’s Office, in the famous Gold Mining town of Virginia City. She returned to Sonoma County in 2002 with her husband and young son.

Her representation included thousands of cases of varying degree, from low level misdemeanors to serious felonies as well as the Attorney for the Juvenile Delinquency caseload. Jessyca enjoyed collaborating on important issues as a member of the Juvenile Justice Committee and took very seriously her role in bettering her community. This experience led her to gain the knowledge and passion to fight for her clients, negotiate favorable resolutions and earned her a stellar reputation with the Judges, her colleagues and most importantly her clients.

In 2021, Jessyca made the transition back to the private sector, where she continues the pursuit of justice through her zealous advocacy and fierce representation of her Juvenile and Adult clients. She is passionate about the law, truth and justice and understands the complexity of our judicial system, and enjoys helping her clients through some of the most stressful times of their lives.

Jessyca, her husband and their three children reside in Sonoma County where her husband coaches High School Baseball. Her weekends are spent cheering from the stands at her children’s sporting events, hiking and spending time with her family.