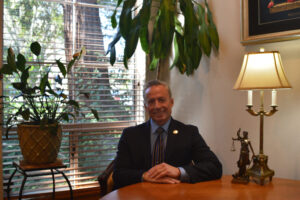 Michael A Fiumara, the founding partner of the Santa Rosa law firm of Fiumara Law, PC, has practiced law in the North Bay for the past three decades. He practices law primarily in the areas of childhood sexual abuse representing survivors, education and juvenile law, criminal defense, and serious plaintiff’s personal injury.

A native of Brooklyn, NY, Mr. Fiumara completed his schooling in rural Sussex County, NJ, graduating third in his high school class. He then attended Rutgers University in New Brunswick, NJ, for his undergraduate degree where he was a Henry Rutgers Scholar as well as Phi Beta Kappa, graduating in 1980.

Following his undergraduate degree, Mr. Fiumara received a full scholarship to the Ivy League University of Pennsylvania in Philadelphia where he earned his Master’s Degree in City Planning in 1982. Mr. Fiumara was awarded a HUD Fellowship and a HUD scholarship and was assigned to a responsible position in the City of Philadelphia Housing and Urban Development legal department.

Inducted into the National Top 100 Trial Lawyers of America, Fiumara has an unmatched knowledge of the Sonoma and Marin County court systems including the Juvenile Courts.

There’s one name that comes to mind in the North Bay when survivors of Childhood Sexual Abuse are looking for the most tenacious—and successful—advocate to achieve justice for them: Michael A. Fiumara.

Fiumara, founding partner of the  Santa Rosa law-firm of Fiumara Law, PC  has practiced law in the North Bay for the past three decades—won the pioneering Childhood Sexual Abuse settlement against the Diocese of Santa Rosa in 2007, securing a settlement of over $5 million for 9 plaintiffs, all of whom were Latino children and young adults.

That settlement—an unprecedented breakthrough in the area of Childhood Sexual Abuse cases—came under the older, more restrictive laws, changed only this year by Governor Gavin Newsom.

The new law, AB 218, which went into effect on January 1, 2020,  NOW allows survivors of Childhood Sexual Abuse a three year “window of justice” until 2023, to file claims against Churches, State Institutions, School Districts, Hospitals, Camps, or any other private or public entities that may have looked the other way or even actively concealed Childhood Sexual Abuse committed by one of its employees or agents.

Fiumara’s expertise and advocacy in the area of Childhood Sexual Abuse, is the reason he has been joined in his fight to seek justice for survivors by a leading North Bay Child Advocacy champion, former State Senator, Noreen M. Evans (see related bio-CLICK HERE).

Fiumara, A Phi Beta Kappa graduate of Rutgers University, also holds a Law Degree from the same University, as well as a Master’s Degree in City Planning from the University of Pennsylvania in Philadelphia, PA. Fiumara has been primarily practicing law in Sonoma and Marin counties since 1992.

Inducted into the National Top 100 Trial Lawyers of America, Fiumara has an unmatched knowledge of the Sonoma and Marin County court systems including the Juvenile Courts.

In addition to his experience in successfully representing victims of Childhood Sexual Abuse, Fiumara has gained an expertise over the last 30 years in California Education law…. Successfully defending students in hundreds of expulsion and suspension cases against California School Districts.

Every case Mr. Fiumara has appealed to the respective County Boards of Education, he has won. His in-depth knowledge of the California Education Code and School District liability make Fiumara an excellent advocate for victims of overzealous disciplinary action, or Childhood Sexual Abuse perpetrated by school district employees.

Mr. Fiumara has had the unique experience of having been employed by the Santa Rosa City School District as an outreach leader and liaison for the students, particularly Latino and minority students since he speaks Spanish.

These students are disproportionately suspended and/or expelled for minor infractions or violations. Consequently, Fiumara has represented dozens of students against these “zero tolerance” School District policies relating to the Education Code and challenged expulsion proceedings that violate students’ constitutional and due process rights.

Over the course of more than 20 years, Mr. Fiumara has handled dozens of school suspension and expulsion cases, many of which went to full hearings.

Every expulsion matter that he has appealed to the County Board of Education was either overturned or remanded in favor of the pupil.

Fiumara has been successful in working out arrangement to avoid the harsh effects of school expulsion. One area of great success has been my ability to utilize the Education Code to challenge and correct unsubstantiated and incorrect pupil disciplinary and school records, effectively expunging the harmful content.

There is no other attorney in our geographic region who practices in this arcane area of law. In addition, Fiumara has completed the specialized training that the State Bar of California requires of attorneys appearing in juvenile court.

Fiumara has represented dozens of students in disciplinary hearings before administrative panels especially after a minor has appeared in juvenile court which often leads to automatic expulsion by the school district. A few of these cases have reached the appellate courts.

His strong advocacy on behalf of his clients has been covered by the Pacific Sun, The Santa Rosa Press Democrat, and The San Francisco Daily Journal, as well as by many local and national television and radio stations throughout the Bay Area.

In 2018, Fiumara successfully litigated and mediated a considerable monetary compensation in the District Court of California, Northern District, for a bi-racial high school student who suffered a pervasive and hostile school environment because the administrators failed to act to prevent the bullying or later to stop the abuse from recurring.

Prior to settling the case, Fiumara collaborated with the San Francisco Office of Civil Rights (OCR) which rendered a very favorable complaint and finding.
In addition, Mr. Fiumara is co-counsel with a San Francisco boutique law firm specializing in school bullying and peer-to-peer harassment cases.

Both firms are representing a 13-year-old, special education, Latina student who was bullied over the span of a year despite her parents’ written and verbal notice to the administrators. The administrators failed to act, and this eventually resulted in a savage and brutal attack by the bullying student which was captured on video by classmates and went viral.

The schoolteacher, who stood by and did nothing during the attack, and the principal were later fired over the assault, but the administrators up the chain did nothing to prevent the abuse despite repeated notice from the parents.

A native of Brooklyn, NY, Fiumara completed his schooling in rural Sussex County, NJ, graduating third in his high school class. Fiumara then attended Rutgers University in New Brunswick, NJ, for his undergraduate degree where he was a Henry Rutgers Scholar and inducted, in his third year, into Phi Beta Kappa.

Following his undergraduate degree, Fiumara received a full scholarship to the Ivy League, University of Pennsylvania in Philadelphia where he earned his master’s degree in City Planning.

In addition, Fiumara is recognized as highly experienced in Childhood Sexual Abuse litigation after successfully suing the Santa Rosa Diocese of the Catholic Church in 2007 on behalf of nine survivors of childhood sexual abuse at the hands of a priest.

For those defendants the prosecution thinks that they may not be able to prove guilty beyond a reasonable doubt, Mr. Fiumara’s  keen negotiation skills and his assertive demeanor have been instrumental in obtaining favorable sentences.

However, if trial is necessary, Fiumara’s Team of experienced litigators dedicate all necessary resources needed to win their clients’ acquittal in a court of law.

Fiumara has a strong track record of reducing an accused person’s fines and reducing charges from felonies to misdemeanors, and Fiumara and his team of dedicated and experienced criminal defense attorneys work diligently to set aside and expunge felonies and misdemeanors so that defendants can get a new start on life.

These are just some of the types of criminal defense cases Mr. Fiumara and his Team of experienced and dedicated defense attorneys handle:

Mr. Fiumara has been practicing personal injury law as long as he has practiced criminal defense. However, prior to moving to Sonoma County, Fiumara had the distinction of working with a well-respected San Francisco boutique insurance defense law firm in the financial district, where he gained valuable insight into how the insurance industry values and defends claims.

With this experience, Fiumara has been highly effective at settling personal injury claims often without the need to litigate, thus saving the aggrieved and injured plaintiff time and expense.

However, when litigation is necessary to obtain a fair monetary award, Fiumara and his team of investigators and experienced litigation Team go all out on behalf of their clients, having won settlements as high as $10 million.

The types of personal injury cases that Mr. Fiumara and his team of litigators have a great deal of experience handling and winning include:

Fiumara has the unique distinction in Sonoma County of not only possessing a Law Degree, but earning a Master’s Degree in City Planning from one of the most highly regarded Ivy League Schools in the country, the University of Pennsylvania in Philadelphia. Their multi-discipline City Planning Department is considered to be one of the top 3 in the United States.

Before beginning his legal career, Fiumara had more than 15 years of land use, zoning and government work experience, including working for New York City’s Office of Management and Budget (OMB) for Mayor Koch one of NYC’s most colorful mayors.

Mr. Fiumara also gained insightful and valuable land use experience when he served as a tremendously active planning board member in the rapidly growing Philadelphia suburb of Voorhees, New Jersey.

A recognized authority on Land Use and Zoning cases, Fiumara has helped resolve complex cases in Santa Rosa and in Sonoma County, including:

– From 2014–to the Present, Nominated and Awarded Top 100 Trial Attorneys, by the National Trial Lawyers Association;
– Since 2015- has Achieved Avvo 10.0 “Superb” Rating
– Member, National Association of Criminal Defense.